When Connor Douglas takes a tropical island holiday, he hopes to leave heartbreak behind. Little does he know the extent of the danger and sexual temptation that awaits him.
Long after Jay Levesque has closed down his operations on the very same tropical island, the memory of Connor haunts him.
Warm nights and scorching sex has someone’s heart in chains. 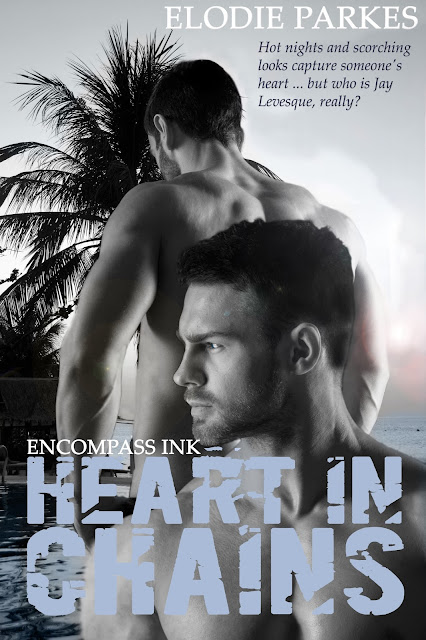 Read the teaser:
Jay grabbed him and somehow they were back in an embrace. This time Jay kissed Connor.
The passion in the kiss exploded in Connor’s mind and he grabbed Jay’s head. He kissed Jay hard, thrusting his tongue into Jay’s mouth, his hands fisting in Jay’s hair, and he tugged to keep Jay’s mouth against his.
Jay’s groan of pleasure filtered through Connor’s haze of lust as they straightened out their bodies and pressed together, each rubbing their erect cocks on the other’s stomach.
Connor’s towel had come off and he was naked in Jay’s arms. His cock ached it was so hard. He moaned into Jay’s open mouth. “I can’t believe how fucking much you turn me on.
Copyright Elodie Parkes 2016, Encompass Ink 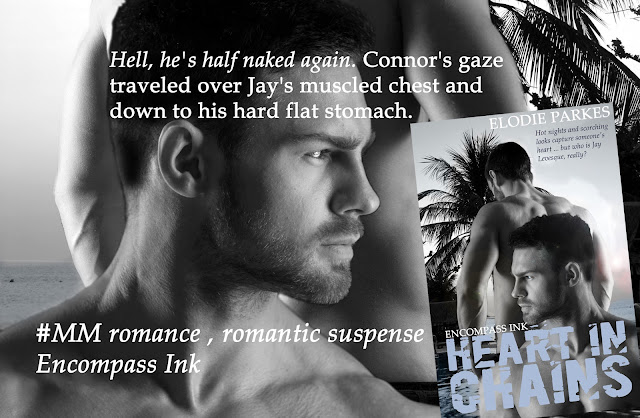 Hi Jay, Welcome to the blog


So tell us a little about yourself.


Jay: Well, you understand I can’t say too much, because of spoilers but more for personal work reasons.
I’m six two, I have hair that is dark, but in certain lights it shows up some chestnut color. Blue eyes that Connor says are really turquoise. Weird huh? My work’s secret. I have to keep it that way for the time being. I’ve recently moved cities and I’m loving Boston.

What about the story, can you tell us something about that?


Jay: It’s an adventure/suspense/ love story. (Grins) Naturally, it might not be an adventure if you’re on the receiving end of what I dish out during my work. It’s a love story for sure. I’m bowled over when I meet Connor. I’ve never felt like that before. The story happens in a warm and lovely environment, pale blue oceans, palm trees, but my life there’s a little dangerous. I’ve always been in dangerous work and I try to explain that to Connor towards the end of the story.


You mention Connor a lot. Tell us about him.


Jay: He’s brave. He’s hot. You know one of those guys who is really good looking and doesn’t know it. He’s a scientist, though not at all what you’d expect. I mean the stereotype of a scientist doesn’t fit him at all. He’s cool, loves music, working out, and me, thankfully. (Smiles)


What’s hot about the story?


Jay: The weather. Me. The love scenes. A sarong. (grins) And Connor of course. The first time I kiss him is so moving, I have to hightail it or fall down at his feet. I have to be fierce to him from time to time, so I’m hiding how I feel then, but when I touch him, damn, it’s like an electric shock right to my … uh … maybe I can’t say where here.


I think we can guess. Do have anything else you’d like to tell us?


Thank you for inviting me to talk with you. I hope people like the story. It’s really Connor’s and my own journey to something we’ve always wanted.


Thanks Jay. He smiles.

http://a-fwd.com/asin=B01EKOTRVE
About Elodie:
I’m a writer who is in love with happy
endings, currently based in southern UK.
I love: music, art, flowers, trees, the
ocean. I work with antiques by day and words by night. Like a vampire, darkness
is my friend, that’s when the silence is only broken by an occasional hoot of
owls in the woodlands opposite my home, and I write.
Find Elodie online: Blog  Facebook  FB  Twitter  Tsu  Google +  G+  Pinterest  Blog
2  Tumblr  ManicReaders
Amazon

Just when you think things are finally looking up…
I’m not too proud to admit that finding Mr. Right involves swiping
Title:  Oak & Mistletoe Author:   J.Z.N. McCauley To Be Published:  October 11th,
A collection of poems composed by over fifty authors in aid of the
LONDON LADY – PLEASE VOTE NOW!!! #KINDLESCOUT – HOW TO GET IT
Go to Top